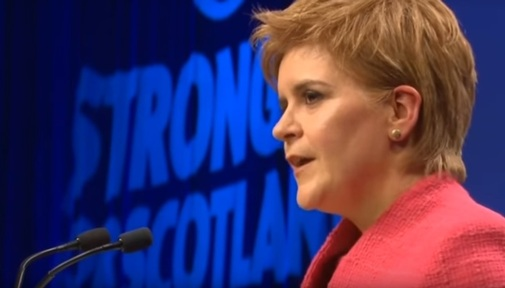 Scotland’s First Minister Nicola Sturgeon has announced she’ll give £50m to ensure all staff in private nurseries are paid the Living Wage to help deliver her Government’s doubling of free childcare hours by 2020.

Ms Sturgeon’s speech at the weekend to more than 2,500 delegates at the SNP’s party's Spring Conference included a pledge to make the early years sector an attractive place for staff to build a career to help nurseries currently signed up to the Scottish Government’s 600 hours of free childcare.

Aside from talking tough about Theresa May’s Brexit plans, in her speech at the SNP conference on 18 March, Ms Sturgeon said: “There are few more important jobs than caring for our youngest children.

"So I can announce today that, by the end of this parliament, we will invest £50m to ensure that all staff working in private nurseries delivering our childcare pledge are paid the real living wage.”

Some 1,000 private nurseries are currently delivering the Scottish Government’s free childcare policy but 80 per cent of early years practitioners in private and third sector nurseries are not earning the Living Wage – equating to 8,000 workers in total.

The First Minister announced that by the end of this parliament, the 8,000 existing and all additional childcare staff will be paid at least the Living Wage as part of the Scottish Government’s near doubling of free childcare to 1,140 hours by 2020.

In her conference speech, Ms Sturgeon also said: “We know that life chances are too often determined before a child even starts school. Doubling the provision of high quality, state funded childcare - as we intend to do in this parliament - is therefore a key part of our plans. “Delivering our pledge will involve the recruitment of thousands more people to work in our nurseries. We need to demonstrate how much we value this work."

In a statement the Scottish Government said: “This significant investment also supports the government’s ambition to improve the attractiveness of a career in the ELC [Early Learning and Childcare] sector, which will be vital in recruiting the workers needed to deliver the ambitious expansion target of 1,140 hours by 2020.

“Evidence shows this level of income leads to increased productivity and reduced staff absence and turnover – particularly important for those working in the (ELC) sector where children benefit the most, by building strong relationships with practitioners through consistent contact time.”

Scotland's latest funding boost for nursery workers follows Nicola Sturgeon's January announcement pledging funding of nearly £1.5m to increase nursery staff numbers in deprived parts of Scotland, as part of a commitment to ensure these locations benefit from an additional graduate by 2018.

“We welcome Nicola Sturgeon's pledge of £50m to uplift the pay of private sector nursery staff. It is vital that this translates to a step change in funding to nurseries which are providing the Government's funded places so that it can raise pay to at least the real living wage.”

Early Years Minister Mark McDonald will set out the Scottish Government’s response to the ‘Blueprint for 2020: Expansion of Early Learning and Childcare in Scotland’ consultation in a statement to Parliament on 23 March.

You can read about the Scottish Government’s financial review of early learning and childcare in Scotland, published last September by visiting www.gov.scot/Publications/2016/09/8729.