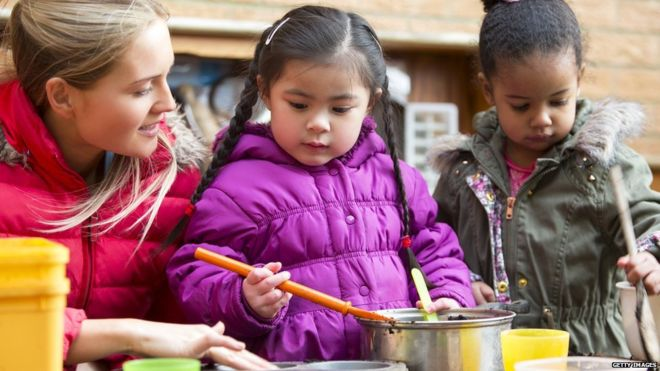 Up to 20,000 nursery workers are illegally being paid below the minimum wage in England, analysis of government data by a childcare charity suggests.

Department for Education data shows 10% of nursery staff earn less than £7.20 an hour the minimum for over-25s.

The Family and Childcare Trust says the government must ensure the nurseries it subsidises do not flout the law.

Childcare on the cheap

Ellen Broome, deputy chief executive of the Family and Childcare Trust, said nursery workers cared for and educated the next generation and deserved decent pay.

"But instead they are being exploited and paid illegal poverty wages. This cannot be right," she said.

She urged central and local government to act immediately to make sure that every childcare worker was paid a decent wage and that taxpayers' money did not go to employers who broke the law.

"High quality childcare does not come on the cheap," she added.

It then took figures on the total number of childcare workers from research carried out by the Institute of Education in London.

But the Pre-Schools Learning Alliance, which represents private, independent and voluntary early years settings, said: "The DfE survey that this claim is based on began collecting data in March 2016 - the month before the National Living Wage was actually introduced."

It is clear, however, from the published survey that the data collection went on until July.

The Pre-Schools Learning Alliance said: "No childcare provider should be paying their employees less than the national minimum or living wage, and it is of course right that any instances of this happening are investigated and dealt with appropriately.

"However, we completely reject the claim that such breaches are happening on anywhere near the scale that the Family and Childcare Trust are suggesting, and our analysis of the same DfE data indicates that any such suggestions are both misleading and irresponsible."

It said: "There's no doubt that low pay in the early years sector remains a significant problem, and one that the government has turned a blind eye to for far too long," said the Pre-School Learning Alliance.

"However, reports like this do little to help the situation. Instead of unfairly and inaccurately criticising 'greedy childcare providers', we should be looking to address the issue of chronic underfunding, the real cause of low pay in the sector."

But the Family and Childcare Trust said it was surprised that little action appeared to have been taken against those employing staff at low rates of pay.

Twenty-two childcare providers have been subject to enforcement action from Revenue & Customs for non-payment of the minimum wage.

A Department for Education spokesman said: "Our model agreement clearly sets out that if providers do not comply with their legal obligations, councils can terminate their funding to deliver our childcare offers."

It has recently invested an extra £1bn a year to fund free hours entitlements for three- and four-year-olds and some two-year-olds at nurseries in England.